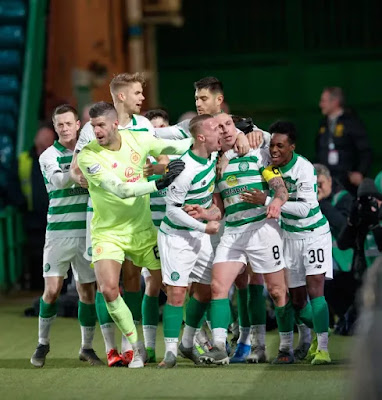 Following Celtic for many years has taught me that there will be frustrating days, there will also be days when you don’t get the result your team’s play merits. There will also be times when the team clicks, the chances are taken and the opponents battered. It’s a passionate game too and the fans who identify so strongly with their club often go through an emotional rollercoaster in a match. We saw that earlier in the week as Celtic defeated Hamilton. At 1-0 and with over 20 shots peppering the Hamilton goal it looked a simple matter of simply scoring the clinching goal and moving on to the next challenge. However 1-0 is a dangerous lead and Hamilton broke away to make it 1-1 in the last minute. Some supporters were caught up in an anger born of frustration. They knew well that Aberdeen were holding Rangers at Pittodrie and the opportunity to go two points clear of the Ibrox club looked like it was being thrown away and their anger was directed onto the field. Scott Brown of course popped up with a dramatic injury time winner to clinch the points and Celtic was two points clear at the top. The mood changed in that instant from frustration to joy and players lambasted by certain individuals moments earlier, were once more heroes. Such is the fickle nature of the game we love and some of those who follow it. 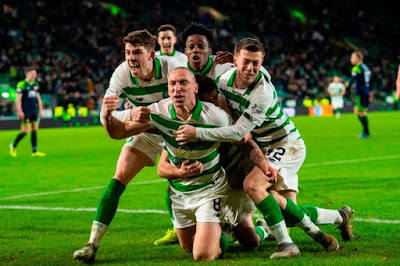 It was bemusing to see some take their frustration out on a team on 9 successive trophies, with a cup final a few days later and sitting at the top of the league but such is the nature of some who follow football. Didier Agathe, Celtic’s pacey wing back of the Martin O’Neill era once said of the occasional frustrated barracking he got at Celtic; ‘It’s not that they don’t care. It’s that they care too much.’  Of course you pay your money and you are entitled to voice your opinions but some perspective is always required. Everything you win in football has to be earned and nothing should ever be taken for granted.

Later today Celtic will run out at Hampden into what will no doubt be a raucous and compelling atmosphere. Hampden is a much reduced stadium since the redevelopment of the 1990s but when it’s full and Glasgow’s big two meet it can still be an atmospheric and noisy stadium. The much maligned Scottish game can still produce atmospheres which eclipse any in the mega rich EPL. The Manchester derby this weekend was played in front of a lethargic and only sporadically noisy crowd. That will not be the case at Hampden where supporters will be fully committed to driving their team on to victory.

Today’s league cup final could have been sold out twice over and many supporters will have to settle for watching on TV in homes, pubs and clubs all over the world. It is important that the Celtic players approach the match in their usual professional manner and aren’t hustled out of their normal style of play. If they turn up and there are no extenuating circumstances such as refereeing errors or silly red cards then I expect Celtic to win as in my opinion they remain the better side. On paper they have better players but as the great Brian Clough once said ‘football isn’t played on paper’ and there are so many variables which come into play in a match of this type. It will be tough and it’ll require a solid performance to win but I believe the team know what’s at stake here and won’t give anything less than 100%. Neill Lennon will ensure they are motivated and organised and of course the supporters will back them all the way.

We all know what this match means to Celtic as they continue their relentless domination of Scottish football. A Celtic victory would send out a clear message that the Hoops have no intention of relinquishing their place at the top of the Scottish game and would be a blow to the morale of an improved Rangers side. Neil Lennon said after his side’s 2-0 win at Ibrox in September that if you’d have believed what was written in the press then Celtic shouldn’t have bothered turning up. The sort of cheer leading in some quarters which masquerades as journalism has been a feature of Scottish football for as long as I can remember. Lennon rightly let his players do their talking on the field at Ibrox and they shut a few up with a fine display. More of the same today would do nicely.

Rangers are going well but their second half display at Pittodrie must have been worrying for their supporters. Celtic are a far more effective side than Aberdeen and have strung together 11 successive victories so confidence is high. It didn’t go unnoticed either that the Lazio side Celtic beat twice in Europe last night defeated Juventus 3-1 and are unbeaten in their last 12 Serie A games so it’s clear Celtic are no mugs these days. Of course the old adage about form going out the window in derby matches comes into play and on a wet pitch with 50,000 screaming fans in attendance it will undoubtedly be a tense and nerve jangling match but if Celtic play well then that tenth successive domestic trophy could be coming home to Paradise and that would be an astonishing achievement. Even Stein’s magnificent team couldn’t do that although they did come close in the 1967-69 period where they won 9 out of 10 major trophies competed for. (They lost to Dunfermline in the early rounds of the 1967-68 Scottish Cup) History is tantalisingly close for this crop of Celtic players and if few think they could match the Lions they can at least write their own page in Celtic’s history. I’ll raise a glass to that.

Come on you Bhoys in green! 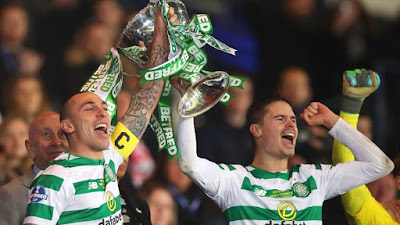