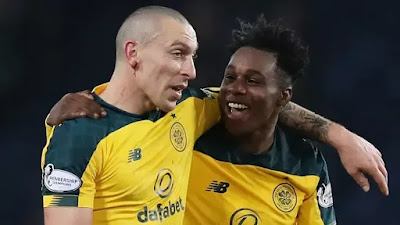 Watching young players come through the ranks and prosper at Celtic has been a pleasing aspect of following the hoops over the years. Some, like Paul McStay or Danny McGrain, stay for virtually all of their careers and become club legends. Others like Dalglish, Nicholas or Kieran Tierney burst onto the scene and give us some amazing memories before the lure of the English league and all its trappings of wealth and fame turn their heads. Celtic supporters have always accepted that the Scottish game has its limitations and that some players will eventually move on. I can still remember how upset I was as a lad when Kenny Dalglish left for Liverpool. The £440,000 fee was huge for the time but even that amount of money was a bargain for a player some consider one of the greatest ever to grace the Scottish game. It didn’t help that the season after Kenny left was the worst in 20 years for Celtic. Danny McGrain was injured in the October and Pat Stanton out for a long time too. Shorn of their best players Celtic lost 15 league matches and finished fifth in the league, failing to qualify for Europe for the first time in a many years. This downturn in the club’s fortunes was partly responsible for the classless booing of Dalglish by a significant minority of the fans at Jock Stein’s testimonial match between Celtic and Liverpool in 1978.

Charlie Nicholas was another player who jumped ship for mercenary reasons and it’s difficult to blame him when Club Chairman, Desmond White’s opening line in contract talks was ‘you know, we’d understand if you left…’ White was clearly aware of the fee Nicholas would accrue in England and as it transpired he joined Arsenal in 1983. It could be hugely frustrating for fans that Celtic often made no real effort to keep players they held dear. The apparent lack of ambition of the board at times in the club’s history clearly hamstrung the team at times and positions of strength were often frittered away.

Others players like Paul McStay, Tommy Burns and Danny McGrain spent virtually their whole careers at Celtic and will always have a special place in the hearts of the fans which few of those who left can aspire too. In the modern era though the one club player has become a rarity as the Bosman ruling freed players to go seek the best terms they could find when their contract expires. James Forrest looks a likely a candidate to spend his whole career at Celtic and has developed into a very effective and important player for the club. He doesn’t receive the cult status or adulation others do at times but remains a key component in Celtic’s recent success.

The arrival of Jeremie Frimpong at Celtic went almost unnoticed at the time. Another ‘project’ was how one article described him suggesting that such modest price tags (£350,000) suggested he was a raw teenager with much to learn. The young player, who is of Dutch-Ghanian heritage, has impressed hugely during first team outings with Celtic and plays with pace, style and boundless enthusiasm. His energy levels drive him up and down the pitch for 90 minutes and the fans have really taken to him. His manager was impressed enough by his performances to say of him…

‘He’s one of the best kids I’ve ever seen at that age. He’s an outstanding talent and watching him makes me tired. The amount of runs he makes wears people down.’

It is testimony to Lennon’s confidence in Frimpong that he threw him into the League Cup Final against Rangers in front of a noisy capacity crowd at Hampden on a rainy, windswept day in Glasgow. He was up against the much hyped Ryan Kent and demonstrated that he could mix it with the best in Scotland by giving a good account of himself. Of course more experienced team mates put him in a difficult situation when their inability to clear their lines led to Frimpong being on the wrong side of Alfredo Morelos. The youngster laid hands on the striker and that was all the encouragement the Columbian needed to go to ground. It must have been a horrendous moment for the teenager to see the referee point to the penalty spot before flashing a red card in his direction. As he trudged wearily from the field his anguish was written on his face. His team were 1-0 ahead but were now facing a penalty and 30 minutes playing with ten men.

Frimpong described his feeling of what occurred next in a post-match interview which made even the most cynical fans smile….

Frimpong’s infectious enthusiasm and apparent boyish innocence masks a determined young man who learned from some of the best since joining Manchester City as a 9 year old. He spoke recently of how he would quiz the first team players at City and learn from them. He arrived at Celtic as a young lad in a new environment and Scott Brown noted immediately that there was no attitude problem from the youngster who was clearly here to learn his trade and work hard. The Celtic skipper said of him…

‘I think he’s been brought up properly. His mum and dad have done a great job with him. The way he is, he’s just passed his driving test at the 27th attempt. Or was it the fourth? Anyway the lads have been giving him a wee bit of grief for that but he takes everything in his stride. He’s happy as Larry and he comes in and puts a smile on all the lads’ faces. For the first couple of weeks he didn’t really speak to anybody. It was other people who were speaking to him. It’s not easy coming here, especially from Manchester City. We thought a wee laddie coming in here from Man City could have a big time attitude but he’s come in and been unbelievable. For me, you can see right away that the wee man is genuine. He has that energy and that smile and there isn’t a single person who has a bad word to say about him.’

Jeremie Frimpong has ambitions to play for the Dutch national side and is actually trying to learn to speak that difficult language. He will undoubtedly attract interest from the English Premiership in the years ahead if his progress continues and we should enjoy the infectious enthusiasm, energy and skill he brings to the team while we can. He has been a breath of fresh air and I hope he hangs around long enough to contribute to what could be a historic period for Celtic. He puts a smile on people’s faces with his personality and his play and that is to be savoured in these difficult times. He’s in the early stages of his Celtic career but the signs are good that we have a real player on our hands.

If he sticks around for a few years and continues his development – oh my days, I’ll be buzzing!