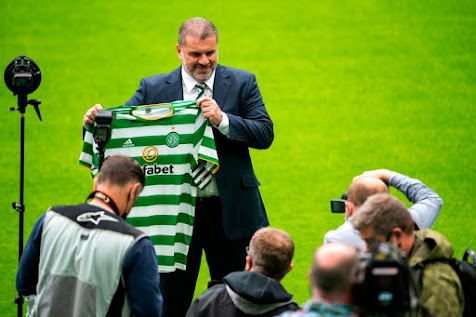 It’s that time of year when the scars of the previous season’s football start to heal and thoughts turn towards the campaign ahead. Celtic’s new manager, Ange Postecoglou, has had a decent reception among Celtic fans, with only a few rushing to judge him before his Celtic side has kicked a ball.  It was suggested he was a ‘yes man’ based solely on the fact he hasn’t thrown a few of last season’s failures out the door. The last thing a new man in any work place wants is to cause an atmosphere of fear. He’ll assess the situation in his own time and we will see changes in the months ahead. He said at the press conference, ‘there will be changes, it doesn’t mean people will be going but we might be bringing other people in.’  He also said clearly, ‘I’ll make those decisions in the coming weeks.’

The big Aussie has been around the block a few times and comes across as the no nonsense type of manager many feel the club needs. His avowed aim is to play attacking football in the best traditions of the club but he’s an intelligent man and he’ll know that Celtic need to keep the back door closed too.

Postecoglou has already met the Scottish sporting media and will soon become wise to their strangulated prose and ability to spin anything he says into a story that suits them. His comments that there is an ‘urgency’ to fill certain positions in the team was translated as ‘emergency’ by the BBC. He’ll get used to that sort of thing but somehow, I don’t see it bothering him. As Fergus McCann once said, ‘the dogs bark but the caravan moves on.’ He’ll have far more important things to concern him, like a Champions League Qualifier in just over 3 weeks.

Finding suitable players to augment the squad by then will be a challenge. The covid situation will complicate things further with potential signings self-isolating when they arrive in Scotland from certain other countries. There will need to be a degree of patience with Postecoglou as it may take him a few months to assemble the squad he wants. There remains the nucleus of a good team at Celtic but it requires work on the spine of the team from goalkeeper to striker. The Celtic supporters will need to be patient but after the calamity that was season 2020-21, there will need to be clear signs that he is structuring and organising the team with more cohesiveness than we saw towards the end of Neil Lennon’s reign. Steven Gerrard was given three seasons to get things right and stuck to his 4-3-3 formation even when things were going wrong. In the end the addition of better players saw the side improve although it has to be said that Celtic went backwards in that period and made his job easier.

FC Midtijylland will provide tough opposition in the upcoming Champions League qualifier. They made the group stages of the Champions League last season and held both Liverpool and Atalanta to a 1-1 draw at home. They are no mugs but they are a side Celtic should be able to overcome in normal circumstances. However, we don’t live in normal times and Celtic badly missed their fans in Europe last season. They face the prospect of playing FC Midtijylland in an empty or near empty stadium and that will help the opposition.

The job facing Postecoglou is a difficult one, especially the need to strengthen the side in the midst of the pandemic. There will be players coming and going over the next few months at Celtic and blending those remaining with the new blood into an effective and confident side will be his focus.

Postecoglou’s Celtic have arguably the three toughest away ties on the fixture list in the first quarter of the season. (Rangers, Hearts & Aberdeen) while Rangers have all of those sides plus Hibs at Ibrox first. You have to face them all in the end but it is always helpful getting them at home first. There is no suggestion of chicanery at the SPFL as these fixtures will reverse next season but it is a tough start for Celtic.

The allure of the Scottish Champions being one of the 32 sides going directly into the group stages of the Champions League in season 2022-23 is a huge motivation for Celtic to back Postecoglou and build a team to have a real crack at the title this season. The club knows the boost a Champions League campaign would give the supporters but perhaps more importantly the financial lift it offers is a serious motivation. It is up to Celtic not to meekly hand it to our biggest rivals who have built their team on borrowed money and hand-outs from wealthy directors.

Ange Postecoglou has a lot to consider in the weeks ahead. There will be patience from most of the Celtic support in the coming season but they will want to see progress. Last season saw a perfect storm of circumstances in which Celtic failed to cope with empty stadiums, the pandemic and key players not producing the form of previous years. It also saw the emergence of a minority of self-entitled fans, weaned on a diet of success who turned on the club when they most needed their support. If Celtic are to succeed under Postecoglou then the supporters, the team and those who run the club are going to have to come together and offer a unified front. When Celtic and their fans are united, they are a much more potent force.

Good luck Ange. We’re all right behind you.