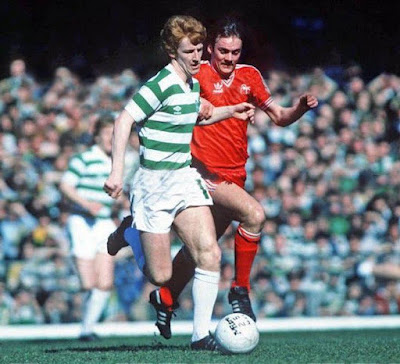 In the spring of 1980 Celtic was charging towards what seemed an inevitable league championship. Rangers were to finish fifth that season well off the pace and only an emerging young Aberdeen side under their fiery young Manager, Alex Ferguson, looked as if they would give Celtic a run for their money. However, Celtic lost a 2-0 first leg lead to Real Madrid in the European Cup to go out 3-2 on aggregate and the cracks began to show. They did beat a poor Hibs side before overcoming Rangers in the derby match. New signing Frank McGravey scored an 86th minute winner to put Celtic in a strong position for the remaining league games.

Next up was a home tie against Fergie’s Aberdeen and in brilliant sunshine a big crowd turned up at Celtic Park to watch Celtic in a game which, should they win, would virtually seal the title. The game started ten minutes late to allow the big crowd in and it looked as busy as the Derby match a few days earlier. Celtic stated that 40,000 were in attendance, a suspiciously round figure, but most who were there knew there were many more inside Celtic Park. Bad luck and injuries, combined with a missed penalty saw Aberdeen win the match 2-1. Celtic was still 5 points clear with seven games to go in an era when it was 2 points for a win. Aberdeen started to believe they could win the title as Celtic started to have their doubts. A 3-0 drubbing of Celtic by Dundee United the following week and a 5-1 humiliation at Dens Park had the Dons scenting blood.

They came to play at Celtic Park again in late April knowing that a win would see them top the league on goal difference. A certain Gordon Strachan had a magnificent game as Celtic seemed nervous and error strewn. The 48,000 crowd watched the Dons win 3-1 and knew the scales had tilted in their favour. Not only were they ahead on goal difference with a few games left, they had the psychological belief that they were the better side having beaten Celtic twice at Celtic Park inside a month. Celtic would stutter past Partick Thistle and beat the same Dundee team which had hammered them 5-1 but 0-0 draw at Love Street in which saw Tommy Burns hacked down several yards inside the penalty box only for the referee to astonishingly give a foul a yard outside. It mattered little in the end as a Celtic win would have meant losing the title on goal difference rather than by the one point they did lose it by. Celtic poor form during the run in to the championship handed the flag to Aberdeen who won their first title since 1955 at Easter Road.

The reason that season came to mind forty years on was the predicament Celtic find themselves in at the moment. Last season Rangers defeated Celtic at Celtic Park for the first time since the new club’s inception and were seemingly ready to take over at the top of the league. They seemed to get vertigo though and returned from Dubai and a sunshine break full of confidence only to collapse and find themselves 13 points behind Celtic before the emerging Covid 19 emergency saw the league called with 8 games left. Celtic were rightly declared champions and Rangers left wondering what the hell had gone wrong.

This season sees Celtic well behind although games in hand could reduce the deficit significantly if the hoops find their form but there is no room for error. Rangers wobble at St Mirren in the League cup and their late comeback against Motherwell shows that they are far from invincible but like Aberdeen in 1980, Celtic need to find their form and plant a seed of doubt in Rangers’ mind. That would be best done by defeating them at Ibrox in January.

Celtic need to go on a run now and kick start a season which began with high hopes but has stuttered along with poor results and dreadful individual errors. Key players such as Odsonne Edouard look off form or disinterested and that can’t stand. He was Celtic’s talisman last season, the one guy you could rely on to show up in the important games. He is a shadow of that player so far this season. That lack of a focal point up front has affected Celtic who have lost and drawn games they dominated as their inability to turn possession into goals haunted them. Of course the whole team has suffered from a malaise this season but Edouard is symbolic of the loss of form and confidence throughout the side.

Recent performances have shown some improvement and a win in today’s cup final against Hearts would give the team a timely boost. Celtic need to show up though, as the game will be far from easy. Hearts gave them a hard game in the 2019 final when the aforementioned Edouard was on song and scored the winning goal. The lack of atmosphere in an empty stadium will hardly help Celtic who feed of their fans energy but a good professional, error free performance is required today.

Winning the cup is always nice and to complete a quadruple treble would be an incredible feat. However the title is what we all desired most this season and for that to happen we must find our form and hope the dizzy heights of the top of the table induces vertigo in Rangers again. It’s a long shot with Celtic currently 9/2 to win the title but as we saw in 1980, 1986 and even in 2008, it can be done. It’s never over till it’s over in football.

I hope Celtic turn up today and bring the cup home for the 40th time. It would give the whole club and support a lift and then we can focus fully on the league and give it our best shot.

Many who follow the Ibrox club think it’s as good as over but there’s many a slip between cup and lip. We’ll see in the fullness of time.