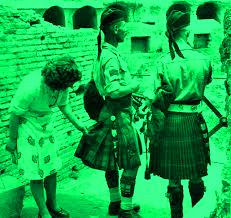 Old Tommy Larkin pushed himself up gingerly in his bed when he saw his son and two grandsons approaching. Tommy junior hugged his old man carefully, as if he was a valuable and fragile heirloom. ‘Alright Da, you been in the wars again?’ The old man’s hoarse and noticeably weaker voice rasped at him, ‘Aye, no for the first time son.’ The three visitors sat around the hospital bed to chat to the old man who on days like today looked every one of his 94 years. His once strong frame seemed somehow shrunken and his face had grown thinner as the years advanced. ‘I slipped on that damn laminate flooring, Doc says the arm’s broke but tae be honest I feel fine,’ the old man said. His grandson, Scott, looked at his proud, old face. His blue eyes still gleamed even from behind the bruising which lined them both. ‘Did ye see the game last night, granda? Big Jullien got the winner in the last minute. Ryan and I are heading tae Rome next month for the away match.’ The old man lay back on his pile of pillows. ‘Naw son, I was in an ambulance at the point. I missed the game altogether.’ Scott continued, noticing how now, 24 hours later he still felt buoyed up by Celtic’s win over Italian side Lazio. ‘They were a decent team, even if their fans are tubes. Celtic park was rocking; it was a great night, just like the old days.’ The old man, a veteran of Celtic’s greatest day in Lisbon more than half a century earlier, listened to the two younger men relay their experiences of the match with a gentle smile on his face. It pleased him that he had passed his love of Celtic on to his son and that he had in turn passed it onto his two boys and their sister Ciara. They came from different generations, had different life experiences but a huge affection for Celtic was something they all had in common. 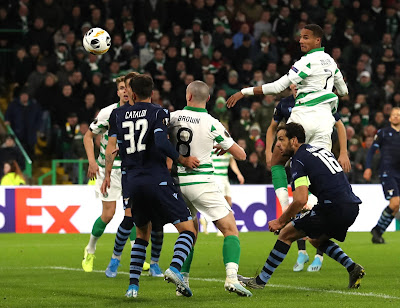 He smiled gently as they finished telling him of their planned trip to the eternal city. ‘Did I ever tell ye aboot the time I was in Rome?’ The two grandsons glanced at each other momentarily as if they felt the old man might he havering a little. ‘You were in Rome, grandad? When was this?’  The old man lay back on his pillows and told them a story that no one in the family had ever heard. They sat in silence as old Tommy’s mind drifted back 75 years…

‘I was 19 and a bit of a wide boy from the Gorbals. Me and my best mate Spud were called up and sent tae the Med. I’d never been further than Blackpool so it all seemed a bit of an adventure tae a couple of young bucks like us. Spud and I were classmates at St Francis and regulars in the old Jungle at Celtic Park and there we were on a big hulking ship and off tae see the world. We had no idea what war was like’ He breathed deeply before continuing. ‘Anyway, we landed in Calabria, right at the toe of Italy. Boiling day it was but thankfully the Jerries were nowhere tae be seen. We got ashore no problem but later that day the serious stuff started. Spud and I were what they called the PBI; the Poor bloody infantry. The Jerries showed up, tanks, artillery, the lot and pounded us. A lot of those young fellas we landed with are still lying in Calabria today’ He paused for a moment as if picturing the scene in his mind before continuing,’ Spud and I were lying in a ditch hoping for the best but thankfully the RAF showed up and saved our arses.’ The two younger men listened in rapt attention. They knew their grandad had been in the war, they had seen an old black and white photo of him and another soldier in uniform standing by a dusty road their arms across each other’s shoulder. He had never spoken of his war time experiences to them before. The old man continued…

‘Spud was a devout Catholic despite being a real tough nut, said his prayers every night. Must have been the nuns at St Francis that got him intae that, holy terrors some of them. Should have parachuted them intae Berlin, Hitler would have given up in a week.  It took us a year of hard fighting and a lot of near escapes to push the Jerries back north of Rome.  The Yanks drove intae Rome after the Jerries had left, claiming the glory as usual but then they lost a lot of men in Italy tae. They organised a big parade and we were ordered tae get our best gear looked oot & polished up. They took us to Rome in trucks for the parade. We wore out kilts and marched behind a pipe band. The streets were lined wi folk, most of them cheering but ye could tell the fascist types, just staring at ye. We marched right past the Colosseum. These days ye can fly tae these places but back then it was an amazing thing for a couple of Glasgow boys tae see things we’d only seen in school books. 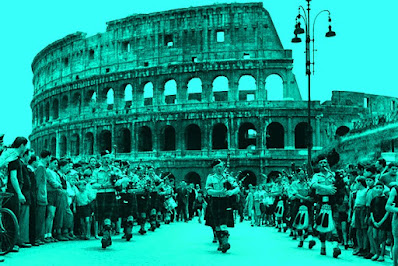 Later we had a 24 hour pass and were looking around St Peter’s Square, all the Tims in the Battalion wanted tae see the Vatican of course. A lot of Poles there that day tae, they lost a lot of men in Italy as well, brave lads those Poles. After Mass in St Peter’s we wandered the streets near the Vatican. We heard some laughing and Spud and I realised it was Italian lassies finding our kilts funny. We got chatting tae a couple of them, one had a bit of English, Maria and Helena their names were. Her old man ran a Café and we headed in for a drink and a bit of grub. Her old man made us feel like we were long lost sons. Refused to let us pay for a thing and we had a great night. They brought out instruments and the songs were flowing. Spud was steaming but still sang ‘I belong tae Glasgow’ and then Maria sang a song I’ll never forget.’ Much to the surprise of his three visitors the old man lying in the bed quietly sang in a gravelly voice…

When he had finished the part of the song he knew he looked at his three visitors. ‘You should learn that song, I used tae know it all but I forgot some of the words, I forget a lot of things these days. Anyway, a week later we were on the move again. We headed up north intae more trouble. The Jerries are nothing if not stubborn. We got intae a shooting match wi some German paratroopers, hard bastards. We cleared them out of a village but Spud was wounded, a bad yin in the chest. He was shipped aff tae a hospital north of Rome and I never saw him again. He died and he’s buried there and one of my great regrets is that I never got to visit his grave. He was a great guy, brave as a lion, saved me more than once.’ The old man stopped talking and looked a little sad. Scott took his hand, ‘Grandad, we’ll visit his grave when we go to Rome, leave some flowers for ye. Tell me his full name and we’ll check it out online. I’m sure they record all the war graves wherever they are.’ The old man looked at his grandson, ‘I’d like that son. If I was ten years younger I’d come with you.’

Scott Larkin, his brother Ryan and a smattering of Celtic supporting friends in Rome for the game with Lazio made their way along the Via Nicola Zabaglia in bright November sunshine. They had little problem finding the cemetery after searching online and tracing their grandfather’s old comrade’s grave. An elderly Italian gardener showed them inside and they were surprised to see that there were hundreds of gravestones standing in serried ranks. They walked up the long rows of perfectly kept gravestones set in manicured lawns, noticing the many nationalities buried there. Poles, British, Canadians, Indians, Africans; all fallen in the same brutal war. It was a sobering sight. After ten minutes or so they found the grave they were looking for. It read; ‘P. Murphy 4th September 1944. Age 22 years.’ Scott stood for a moment in silence as his younger brother laid a brightly coloured bunch of flowers beside the gravestone. He also placed his grandfather’s old cap badge and a folded Celtic scarf on the grass beside the headstone before saying quietly, ‘Hi Spud, Tommy Larkin sends his regards. He told me you were a brave man and big Celtic fan. Celtic’s playing in Rome tonight so we thought we’d pay our respects. I hope the Celts can make you proud. Sleep well pal.’

As dusk fell on the eternal city the brothers stuck close to the thousands of Celtic supporters who had descended on Rome for the game. Lazio Ultras had threatened violence against Celtic supporters and there was safety in numbers. In a bar near the Stadio Olimpico, Celtic supporters drank and sang as the match drew closer. Scott got into conversation with young Italian called Marco who hailed from Tuscany and had travelled to Rome for the game. He asked him about the song his grandad had sung to them in his hospital bed. ‘It is an anti-fascist song,’ Marco said in excellent English, ‘It was sung by the communist partisans during the war. Today, it is still sung by people who don’t like fascists or racists.’ He turned and shouted in Italian to other members of the Barga CSC who nodded at him and begin to sing Bella Ciao in Italian. The Scots in the bar joined in the part they could easily follow and roared out, ‘bella ciao, bella ciao, bella ciao, ciao, ciao!’  Scott Smiled at his brother, his grandad would love this.

A tense game was tied at 1-1 with time running out as they watched from behind the goal in the Stadio Olimpico. Scott looked at his brother Ryan, ‘a draw here is a good result.’ No sooner were the words out of his mouth when a Lazio defender was short with a pass and Celtic stormed forward. The 7000 Celtic supporters roared in expectation as the ball was played to Olivier N’tcham. The Frenchman’s first touch looked poor and pushed him slightly wide but as the goalkeeper rushed out to meet him he deftly chipped the ball over him and into the net. The huge Celtic support exploded in joy! The two brothers hugged and danced along with thousands of other delirious Celtic supporters.

1500 miles away in Glasgow, an old Celt was watching on TV. Old Tommy smiled broadly as N’tcham scored the decisive goal in Rome. He was happy for his grandsons and all those supporters who had made their way to Rome to back Celtic but he was happier still for another reason. As he watched the celebrating players and fans in far-away Rome, a tear rolled down his cheek and he whispered, ‘That one’s for you Spud, that one’s for you pal.’