The Canon and the Brother 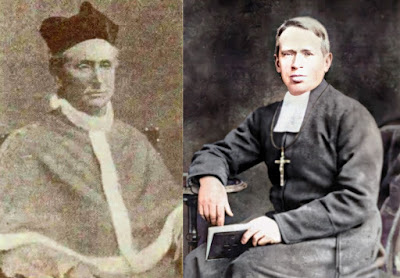 The Canon and the Brother

I had a chat recently with a fan of Hibernian FC who was quite disparaging about Celtic and described them as ‘a tribute act’ and a ‘cheap imitation of Hibs.’  It would be easy to pass off his irritation with all things Celtic as jealousy that the Glasgow Irish produced a side which became a worldwide name and eclipsed the achievements of their older cousins in Edinburgh. That was always likely to be the case given the disparity in numbers supporting the two sides; there were 25,000 Irish in Edinburgh in the 1880s and ten times that number in Glasgow. Hibs were naturally limited in their early years by the size of the population supporting the club while Celtic had a huge potential for growth.

The Irish pouring off the boats at Broomielaw on the Clyde in the years after An Gorta Mor may have found work in a land being transformed by the industrial revolution but it would be the most menial and poorest paid jobs for the majority of them. So it was too with housing as unscrupulous, slum landlords subdivided rooms in the poorest parts of Glasgow for the new arrivals. Exploitation was and remains one of the bitterest fruits of unfettered capitalism. The Catholic Irish were not particularly welcome in Scotland, a land which had adopted a dogmatic and stern form of Calvinism during the reformation. Latent prejudices bubbled to the surface and predictable discrimination followed.

All Celtic fans will know that in the pivotal year of 1887 Hibernian FC won the Scottish cup and were feted in the hall of St Mary’s church in Glasgow’s east end by their admirers among the Glasgow Irish community. It was a source of pride to all that a club founded in Edinburgh’s ‘little Ireland’ could win the premier trophy in the land. Their Secretary, John McFadden said at the celebratory dinner that the Glasgow Irish should, ‘go and do likewise.’ Brother Dorotheus and Walfrid were in attendance and had long been fundraising for their charities by hosting football matches. They already knew the huge potential that existed for an Irish side in Glasgow.

John Glass, later one of Celtic’s founding fathers, had already founded a team called ‘Eastern Hibernian’ and they had played games with other Irish sides in and around Glasgow. He would have been well known to Brother Dorotheus and Walfrid through the rapidly developing football scene in Scotland. Another side called Western Hibernians played a charity match for the Poor Children’s Dinner Tables in February 1888 and contained 7 players who would help launch Celtic just a few months later. The circumstances of Celtic’s birth may owe something to the inspiration Hibs provided but it is clear that for several years leading figures in the Glasgow Irish community had been acutely aware of the potential football had for raising much needed funds for the impoverished communities of the east end for some time. They also recognised football as a potential vehicle of social integration for the Irish-Scots.

I often found the hostility some Hibs fans have towards Celtic to be a bit puzzling. Some feel Celtic ‘stole’ their best players in 1887-88 when the Glasgow side was gearing up for its inaugural season. While there is no doubt that Celtic did indeed entice some of Hibernian’s west of Scotland players to throw their lot in with the new club, it was a time when players had no formal contracts and were free to play where they chose. The game then was strictly amateur and Celtic’s willingness to pay players ‘under the table’ swung the deal for most. It wasn’t very gracious of Celtic to behave that way towards Hibs but the new club was determined to put up a side which might give the best in the Scottish game a run for their money. 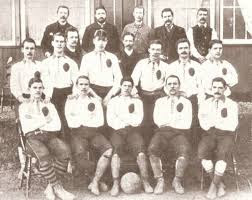 Hibs went into a steep decline after the formation of Celtic. Not only did the Glasgow club poach their best players, there were also internal divisions at Hibs over Irish Home Rule and this squabbling was capped when a former secretary absconded with most of the club’s funds. The club then failed to send a representative to the inaugural meeting of the newly founded Scottish League in 1890 and were not listed among the members. They also failed to pay membership fees to the SFA in 1891 and were deleted from the list of members.  The club lost its ground during this period and stopped functioning for over a year. Club captain James McGhee and Sandy McMahon simply took the train west and joined Celtic.

Hibs may have encouraged the founders of Celtic to proceed with their plans but all the signs were there that an Irish club would be founded in Glasgow in any case. Walfrid and his companions wanted to maximise the financial benefits of football and put this money to use helping alleviate poverty amongst their community. As Hibs struggled to reform and regain their place in Scottish football, Celtic went from strength to strength and won their first Scottish cup in 1892 just five years after Hibs had done so. Celtic would win four Scottish titles and three Scottish Cups in the 1890s as Hibs struggled to deal with the de-facto professionalism of the game. John Glass knew it was coming in Scotland and had Celtic ready for it even if the charitable principles of the club suffered somewhat for a while. With Walfrid called to London in 1893 to work with the poor in the east end, Celtic’s business oriented patrons guided the club from charitable status to being a private limited company. This move pained the purists who wanted the club to remain a charitable institution but if Celtic was to build a fitting stadium and compete in the professional league then finance was required. The hard headed businessmen won out over the idealists and Celtic became a business.

Scotland had dragged its feet over the issue of professionalism and in doing so saw a lot of talent heading to England. Preston North End played ten Scots in their championship winning side of 1888-89. Scottish players were regarded as among the best in the game and flooded south to earn a good living in the English league. It took the SFA till 1893 to accept that players could be paid for playing football. This ended the widespread culture of rewarding players ‘under the table’ or by giving them pubs to manage.

When professionalism came it was Celtic who was best placed to thrive and thrive they did. They ended the nineteenth century as one of the wealthiest clubs in the UK. Their team was hugely successful on the field and their stadium among the best in the land. They shared common roots with Hibernian and Dundee Harp but had immensely more potential to become a major footballing force. The fact that 75% of Scotland’s Irish community lived within 15 miles of Celtic Park gave them a huge demographic advantage over other clubs with Irish roots which they used to the full.

Hibs took longer to see that an amateur, all-Catholic team would struggle in the professional era but eventually accepted the inevitability of paying their players and fielding a mixed team. Football was changing and the team Canon Hannan and Michael Whelahan founded among the Catholic Young Men’s Society at St Patrick’s church’s would adapt or vanish like many others of the era. Thankfully Hibs soon settled their ground issue and took up residence at Easter Road in 1893. The club had its successful periods and its barren spells but at least it was in business and took its place among the foremost clubs in Scotland.

Today both Hibernian and Celtic are fully integrated into the fabric of Scottish football. Both clubs have a more diverse support than was the case in the early days of football. Some argue that Hibs ‘dilution’ of their Irishness was in part due to their need to reach out to a wider supporter base than their founding community but Celtic too is proud of the increasingly diverse fan base following the club.

Celtic was never a ‘tribute act’ or ‘cheap imitation’ of Hibs. From earliest times they walked their own path and found a measure of fame as one of the great football institutions of Scotland and indeed world football. Hibs too found their place in the game after the triumphs and tribulations of their early days Both clubs have come a long way since Canon Hannan and Brother Walfrid sought to use football as a vehicle to develop the fitness of young men in their community and to give that community a sense of pride. They also saw football as a vehicle to raise much needed funds to support their humanitarian work.

The Canon and the Brother should be honoured for what they did for a marginalised and often despised community. Their respective clubs have mirrored the rise of their community from marginalisation and poverty to eventually taking their rightful place in Scottish society and that is something to be proud of.