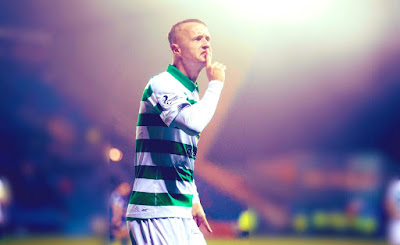 Oscar Wilde is credited with saying, ‘there’s only one thing worse than being talked about and that’s not being talked about.’ It that context Kris Boyd’s comments on Leigh Griffiths’ mental strength during Wednesday’s Kilmarnock v Celtic fits a pattern in which pundits expound strong and often controversial opinions in order to get noticed, cause debate and in the end have more people tuning in to hear them. Thus their employers are happy and the pay cheques keep arriving.

We’ve seen this approach from the tabloid newspapers for years, particularly in the online editions whose sole purpose is to expose as many people as possible to their adverts. Headlines are sensationalised or ever misleading in order to get folk clicking on the links. The phrase ‘click bait’ was invented for such tactics and it is all about the mighty dollar at the end of the day. A good example was during Celtic’s Europa League clash with Lazio when one tabloid led an online story with the headline ‘Celtic fascist shame.’ The story concerned Lazio’s right wing supporters adopting the Celtic (Keltic) cross as a symbol of their perfidious ideology. It would be easy to see how the reader could be misled into thinking the story concerned Celtic Football Club when in fact it was nothing of the sort. This sort of thing is deliberate and as folk comment, spread their annoyance about the misleading headline, the click counter goes up and the advertisers are happy. As someone once said, ‘ there’s no such thing as bad publicity.’

The word ‘pundit’ comes from the Sanskrit and translates as a wise or learned man and it’s fair to say that not all football pundits live up to that moniker. Boyd has a history of making controversial statements which often fail to hold water. He commented negatively about Celtic’s Boyata and N’tcham, saying that they were not interested in playing for Celtic. The then Celtic manager, Brendan Rodgers suggested he shut up and concentrate on getting back into the Kilmarnock first team. It was with no little irony that he said of Joey Barton...

‘He’s a very intelligent guy who speaks well but when he comes on that radio station (Talksport) and behaves the way he behaves, trying to get attention, trying to get people to phone in. I don’t pay much attention to it.’

It would be fair to say Boyd is guilty of a little attention seeking himself but that’s the nature of the job he does. Others, such as Chris Sutton are equally adept at stirring up debate but at least import some football knowledge and common sense into his statements. In the febrile world of the Celtic, Rangers rivalry pundits who once played for one of the teams are often derided by supporters of the other as biased. The trick is to listen to what they say and think about it logically. Thus Sutton’s comments on Morelos’ ‘cut throat’ gesture are in marked contrast to some former Rangers players who suggested he meant the game is over. Common sense tells you that gesture has the same meaning all over the world and it’s nothing to do with time.

Leigh Griffiths clearly reads or hears some of the comments made by pundits like Boyd as his gesture towards the commentary box after his goal suggests. He is a young man who has had to deal with a mountain of online abuse over the years, some of it vile and involving his family. He has been fighting a battle against his personal demons and hasn’t always made the right choices in life but Boyd should know better than to make crass comments about a player struggling to resurrect his career. He lost his own brother after mental health issues ended tragically and has set up a charity to help others with such problems. That is laudable and very decent of him but perhaps he could show more charity towards people like Leigh Griffiths and not personalise his comments? He’s paid to talk about football and stir up interest but could learn from others who do it with more tact and grace.

Of course some Celtic fans see it as simply another ex Rangers player being negative towards Celtic and one even posted a clip of Boyd on social media being interviewed during his Ibrox days where he seemed unable to even say the word ‘Celtic’ referring to them in the interview as ‘them.’ He’ll never be popular in some quarters but that’s the nature of the often bitter rivalry between Glasgow’s big two. I tend to think he’s still an apprentice at this tv stuff and needs think carefully about what he says and how it is perceived. Mental health remains a delicate subject in Scotland where the prevailing culture of ‘manning up’ still holds sway in certain sectors. He’d do well to keep his comments related to football and perhaps learn from his errors instead of compounding them by trying to justify them in the aftermath.

As for Leigh Griffiths, He has made mistakes in his life as he’d readily admit but I hope he slays his dragons and gets back to doing what he does so well and that’s putting the ball in the net.