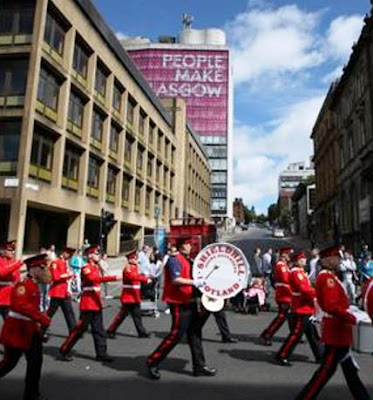 I was fortunate enough to enjoy a break in the sunshine of Cyprus this past week and not being one to laze about in the sun managed to see a bit of the island. Those of you who have visited there will know that it was been partitioned since the Turkish invasion of 1974. There is a long and often bitter history between Greeks and Turks which stretches back to the days of the Ottoman Empire. Cyprus was ruled, often brutally, by the Ottomans for over 300 years and became a British possession when the Ottoman Empire collapsed in the early twentieth century. Its population is about 80% Greek Cypriot with around 18% being of Turkish origin with various other nationalities settling there making up the rest. When the Greek majority pushed for independence in order to seek unity with Greece in the 1950s, the British reacted in typical fashion by setting up an auxiliary Police force made up of Turkish Cypriots. Divide and rule was always a useful tactic in days of Empire as India, Ireland and other places found. Predictably it made relations between the two communities worse.

I got chatting to a fellow Celtic fan as our coach trundled through the Troodos Mountains towards the beautiful Kykkos Monastery and he showed me on his phone the news from home of the despicable attack on a Catholic Priest, Tom White, at St Alphonsus Church in Glasgow’s east end during the annual Orange Parade in the city. The incident took place as the vigil mass was ending and parishioners were leaving the church and Father White was spat on and called a ‘Fenian bastard’ among other vile things. It seems the Police officers guarding the church were called away to another incident related to the parade and thus the bigots had free reign to vent their considerable bile on the Priest and the mostly elderly parishioners. One wonders what sort of society we have when Police Officers need to guard a place of worship. One worshiper said…

‘The priest was in front of us trying to say thanks for attending Mass but the verbal abuse from people in the walk, not just hangers, on was frightening. They shouted paedo, the spat on the priest, hit him with a baton. They were obnoxious. It’s so sad to see such venom in people’s faces towards church goers.’

Coming from a part of Scotland which isn’t subjected to Orange Parades, my friend on the bus was bemused about the sort of bigotry which leads people to behave in such a manner. Alas, as a Glasgow boy, I’ve seen it all my life and it’s like watching the same rotten movie over and over. The Orange Order, as usual says ‘nothing to do with us’ the internet is awash with folk blaming Catholic Schools and giving us the old ‘both sides as bad as each other’ nonsense. The Orange Lodge attracts these people to their displays of naked sectarian triumphalism like flies to rotten fruit for a reason.

They offer a platform where some of the more unsavoury attitudes held in our society can be expressed freely. I’ve known a few Orangemen in my life, (it would be stretching it to call them friends) and none of them were particularly religious. It was more a tribal celebration of ‘them and us’ which is sadly found in societies all over the world. I even attended the funeral of one such chap and as his brethren lined the crematorium in all their regalia, I thought it interesting the sort of conversations you hear when folk are unguarded and believe they are surrounded by what the call their ‘own kind.’

So here we are in 21st century Scotland, a place where Priests are spat upon in the street and Police are required to stand outside places of worship as people celebrating a victory by a Dutchman at a battle in Ireland 328 year ago, swagger past dressed like chocolate box soldiers. The absurdity of it all is beyond parody. Scottish Actor John Hannah was scathing in his condemnation of the attack on Canon White and the mind-set which facilitates such events...

‘It’s the 21st century and my city, Glasgow, still allows this barbaric, bigoted bunch of medieval fuckwits to parade through the city displaying their narrow minded blinkered version of fascism for the whole world to see. I’m ashamed of you Glasgow.’

The right to march and demonstrate is part of any democratic society but it has to be within safe and decent limits. Too often the hangers on and at least some of the marchers at these parades behave in a manner which oversteps the mark. Attitudes towards them are changing though and there is a more confident and vocal group in society, especially among the young, asking why we put up with this nonsense every year in the heart of our cities and towns. It’s ironic that the stoicism with which Glasgow’s Catholics have traditionally endured this nonsense is one reason it continues. Any counter demonstrations or disturbances would perhaps see the city council and Police act. No one advocates breaking the law but our politicians need to see the anxiety, trouble and poor behaviour these walks cause. You’d have to conclude that if these demonstrations were accompanied by anti-Jewish or anti-Muslim sentiment, something would have been done years ago. As one chap said to me recently, ‘Let them march but do it in a field in Ayrshire and give the rest of us peace.’

The 2011 census found the religious persuasion of Glaswegians to be as follows; Catholic 27%, Church of Scotland 23% and people of no religion 32%. The rest of the city’s population were of other faiths or preferred not to say. It remains ironic that the council tax payers of the city who fund the policing of such parades include many Catholics who find them intimidating or offensive. Perhaps if the Orange Order paid the policing costs themselves we’d see a decrease in the sheer number of parades which currently outnumbers those taking place in Belfast. I don’t see why the vast majority of folk who have no interested in them or their outdated ideas should foot the bill for their annual jamboree which is estimated to be around £1.5m each year.

Scotland is a changing country and most of us want it to be an inclusive place where people feel welcome and comfortable. I have no problem with people celebrating their cultural heritage in a manner which we can all enjoy. Wouldn’t it be great if public events and displays were accessible to all and a genuine celebration of diversity and not some grim, triumphalist stomp through the streets? For too many though it remains a forum for base displays of intolerance, drunkenness and the sort of vile behaviour we saw directed at Canon White.

I’m sure there will be some folk reading these words thinking ‘Very predictable, another Celtic fan slagging the Orange Walk’ but this is about the sort of society we want in Scotland not football or politics. It’s about decency and respect for others and most Scots want that I’m sure. Do we move forward as a progressive nation or are we stuck in the bygone days of yore?

It's time for our leaders to lead. 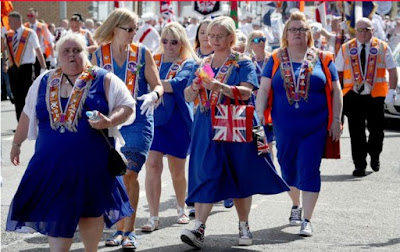