Money can't buy you that 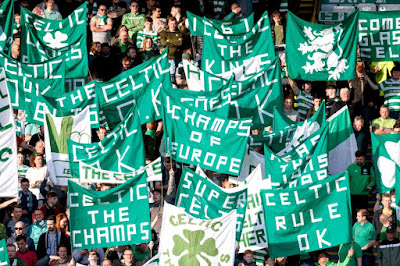 I watched Celtic dismantle Partick Thistle this week with a display of sparkling, attacking football any side in Celtic’s history would have been proud of. This season has been a triumph for Brendan Rodgers’ side as they have cut through the domestic opposition like a combine harvester through a field of corn. Now the side are just two matches from completing an incredible unbeaten domestic season which will guarantee them a deserved place in Celtic history. Not since Maley’s Celtic side of 1897-98 completed their 18 game league programme undefeated has the club managed this feat. Even the magnificent Lisbon Lions found a bogey team in 1966-67 to blot their otherwise unblemished league record; Dundee United defeating them home and away by a 3-2 margin.

In any senior league, in any country, completing the season undefeated is a rare and laudable feat. Celtic is not only closing in on this feat but also on a Scottish points and goals record. In the longer term Scotland’s longest top flight unbeaten run of 62 games set by Celtic, (20 November 1915 – 21 April 1917) might also come under threat given the prowess of the current side. That being said, Rodgers is wise enough to take the ‘one game at a time’ approach and will look no further forward than Sunday’s final league game with Hearts. That game will be an awesome spectacle to see as a sold out stadium prepares to party and will create a whole stadium 'tifo' to honour the Lisbon Lions. The season is entering an exciting and climatic finale. So much is within reach of this young Celtic side and the supporters are willing them to jump these last two hurdles and complete the season as ‘Invincibles.’ Few would bet against it.

Of course there are those who seek to belittle Celtic’s achievements and not just the usual suspects here at home. I got into conversation with an Irish chap who supports Liverpool and found that he had sadly succumbed to that old arrogance we have seen for years from many who follow the English game. The usual ‘My Nan would be top Scorer in Scotland’ nonsense followed, which was particularly ironic given the chap had dumped any interest in his local league in Ireland to try to grasp some EPL glory.

It wasn’t always like this as I recall a Celtic v Manchester City game played in Dublin in 1992. Celtic supporters made up 95% of the crowd and the English side were well beaten. Football then was more of a level playing field as satellite TV was in its infancy and the financial clout of English clubs was not yet drawing in the best mercenaries in Europe. Celtic was more popular in Ireland in those days than most English sides as their roots are deep in the soil of that country. The rise of Sky TV was to change that as a new generation grew up watching English football packaged and sold very slickly.

Of course, to compare Scottish football to the billionaire’s playground of the EPL is simply absurd. England has 53 million people making it almost exactly ten times the population of Scotland. It also has a deal with satellite TV which brings in literally billions of pounds. Scotland is the poor relation in financial terms but that doesn’t mean football here is as poor as some of our more arrogant southern friends sometimes suggest. Just ask Joey Barton who came up here stating he would be player of the year and that ‘Scott Brown isn’t in my league,’ only to be handed his ass on a plate in most games he played. Not only do I recall him being totally outclassed in the 5-1 drubbing at Celtic Park last September, but a Hamilton Accies player actually nut-megged him at Ibrox as his side were lucky to gain a 1-1 draw. He arrived saying he wanted to be the best player in the country and left saying the Scottish media had built him up to be ‘like Neymar or Messi.’ He said in the wake of that 5-1 mauling at Celtic Park…

“After Celtic, I’m having to sit here and take it on the chin – however unjust I feel that is. It’s difficult when I’m playing at a level which, clearly, I’ve not played at before. It’s a much lower level and I’m trying to help people get to a higher level. They think me helping is me trying to say, ‘You’re not good enough’. It’s difficult."
Personally, I’ve seen good, bad and average English players in Scottish football. I have never felt Mr Barton was a particularly gifted footballer and he didn’t stick out as a good player in a bad Rangers side that day. He looked as mediocre as the rest.

Despite what the critics say, Scottish clubs have historically punched above their weight in Europe, reaching 10 European finals. (Rangers 4, Celtic 3, Aberdeen 2, Dundee United 1) No nation of 5 million or so people can claim such a proud record. Countries of similar size to Scotland such as Norway, Ireland, Croatia or Denmark all fall well short of Scotland’s historical record.  Celtic was of course the first British club to become European Champions and have a proud European pedigree which includes reaching the last 16 of the Champions League on 3 occasions in recent years. Celtic have held their own with English sides they have met in Europe over the years having won 7 and drawn 6 of their 20 competitive ties. Some of their victories over the likes of Leeds United, Liverpool, Manchester United and Blackburn Rovers have irked some English commentators as many of them share the conceit that Scottish clubs simply shouldn’t be beating English clubs. When watching the footage of Celtic’s 2-0 win at Liverpool in 2003, you can still hear the pain and disappointment in the commentator’s voice as Hartson fired home the clinching goal.

Of course when you point out Celtic’s European record to critics of Scottish football they tend to shift focus onto the comparative strengths of the EPL and SPFL. It’s simply unfair to compare a league bloated with Sky’s billions and staffed by mercenaries from all over the world. A recent survey suggested 65% of EPL players are foreigners. For all its blood and thunder, all its clannish ways and petty hatreds, I like Scottish football. It’s full of honest endeavour and some of the most knowledgeable and passionate fans in the world. There is a sterile quality to many English games which leaves me disinterested and reaching for the off switch.

So on Sunday I’ll be enjoying the party and celebrating my team’s success. Of course I’d love Scottish football to be more competitive as this would in turn drive up standards. I’d also like our clubs to be more successful in Europe but I’ll defend our game against those who run it down based on nothing more than unthinking prejudice. Folk who have never attended a Scottish game trot out tired old clichés which demonstrate nothing but their ignorance.

Football supporters in the small countries of Europe have watched as the big leagues demand a bigger and bigger cut of the financial cake. It is up to UEFA to continue to promote and support football all over Europe and not just bow to the mega rich leagues. Like it or not we are never returning to the more equal days of 1967 when a team like Celtic could conquer Europe. We accept that the financial gulf between teams like Celtic and the mega rich elite European clubs is unbridgeable but equally money doesn’t win games. It’s eleven players against eleven and as clubs such as Juventus, AC Milan, Barcelona, Manchester United and Real Madrid have found at Celtic Park, you write off Celtic at your peril.

Football isn’t just about money; it’s about that passion for your club, that comradeship with your fellow fans and that journey which mirrors life with all its triumphs and disasters. Fans in Europe’s smaller leagues love their clubs with as much passion as any of those in the big five leagues. That passion still makes little miracles happen now and the as Barcelona found when they came to Celtic Park in 2012. The late Tito Villanova said at the time…

The stadium was spectacular. I have been lucky in my career to have been to many grounds but I have never seen anything like it.’ 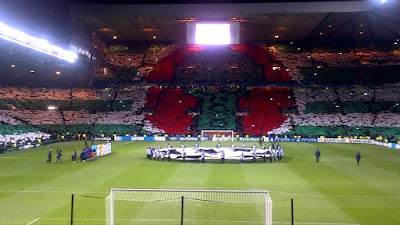 Celtic know they are up against it in Europe but are currently building an exciting young side which promises to give the big boys a fight. When that incredible support gets behind the team on those big games under the lights it can be an awesome spectacle. Paul Haywad, writing in the Telegraph after Celtic beat Barcelona in 2012 summed up the potent combination which Celtic and their supporters bring to European games at Celtic Park when he said…

‘Somewhere between madness and love, this fanaticism did for Barcelona on a night when the Celtic team and their disciples were indivisible. Money can’t buy you that.’

So tomorrow I’ll delight in our title celebrations. We have much to be proud of and much to look forward to. I long ago stopped caring about the opinions of others on Celtic or Scottish Football. If they bring their over hyped sides to Celtic Park they’ll soon learn that there’s abundant life outside the big leagues and supporters who put their's to shame.

Enjoy tomorrow. These are great days to be Celtic supporters. 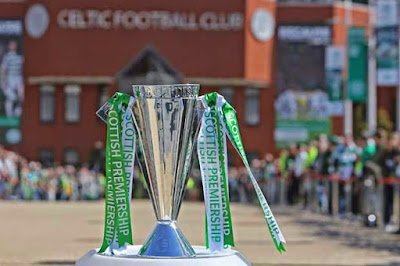