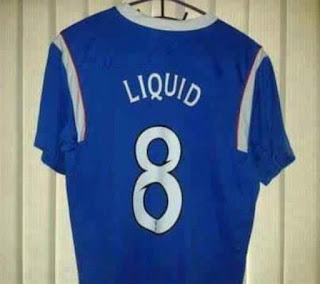 
Mark Twain once said, ‘If you tell the truth you never have to remember anything.’ Perhaps The Rangers FC 2012 Propaganda Minister James Traynor should consider those words as he ponders on the words he wrote a year ago…


“Rangers FC as we know them are dead. It’s all over. They are about to shut down for ever…They’ll slip into liquidation within the next couple of weeks with a new company emerging but 140 years of history, triumph and tears, will have ended… No matter how Charles Green attempts to dress it up, a newco equals a new club. When the CVA was thrown out Rangers as we know them died.” (Daily Record, 13 June 2012)


A little embarrassing that Mr Traynor was subsequently hired by Green and then had a less than subtle change of view about what occurred at Ibrox a year ago. Even truth, it seems, can be bought and sold. But wait even Charles Green had his say as they awaited the HMRC response to the CVA offer…


‘If the CVA fails then the history, the tradition, everything that is great about this club is swept aside.’ (BBC Interview)


The Law of the land is equally clear and doesn’t rely on the whims of public opinion. Rangers FC Plc (company SC004276) was insolvent and wound up. No ifs, buts or maybes. To paraphrase Monty Python’s famous parrot sketch…


‘Rangers Fc is no more, it’s expired, gone to meet its maker, it’s a stiff, pushing up the daises, bereft of life, it rests in peace, it has kicked the bucket, shuffled off this mortal coil, run down the curtain, fallen off the twig, gone to join the choir invisible, snuffed it… this is an ex-football club!’


Despite this demonstrable fact, we are daily treated to denial not just from disconsolate followers of the late and unlamented Deadco, we are treated to the delights of Radio phone in shows during which denial is not only unchallenged but actively supported by ‘pundits’ so transparently biased or incompetent that it’s laughable. Listening to drivel such as Clyde ‘Super Score Board’ this season one could be forgiven for thinking that truth and reality are arrived at by denying verifiable facts and arguing that black is white. ‘The Company died, not the Club’ we are told! ‘Our history was bought and transferred to the Newco.’ This utter fantasy is peddled as truth in sections of the media. Rangers Football Club (the clue is in the name) is in the process of being liquidated not some holding company. If the Newco is the still the same club then why did it have to apply to join the SFL? Why was it not still a member of the SPL? Why is it not allowed into European competitions until it can show 3 years accounts? It should stop the charade and apologize to the creditors ripped off for millions and the chaos the Deadco caused in Scottish Football. So why is this ‘same club’ myth peddled at all?  The answer for shows like SSB is of course falling audiences and loss of advertising revenue. If the Sevconians stopped listening they would be in deep trouble.  Ditto for the chip wrapper tabloids, they called it right at the time and now some are attempting to re-write history. When Alex Thompson of Channel 4 news showed up on SSB last year, Mr Keevins ran up the white flag immediately with the crass remark that…’Corporate Governance is above my pay grade.’ In other words, he’d rather write wee football stories and not bother investigating complicated stuff like the shady goings on at Ibrox. This was the biggest story ever in Scottish football and he couldn’t be bothered. Utter dereliction of duty. Thompson, nobody’s fool, painted a picture of a cosy and incestuous local media who were fed scraps from Murray’s table and scarcely wrote a negative word about him in all his years in charge of the Deadco. No one on SSB disagreed so I guess there’ll be no Pulitzer prizes for our journalists then?


Consider how Fergus McCann rescued Celtic before they could slip into administration in 1994. He said recently that it would have been cheaper to let the Club die and reform as a Newco but felt that the Pride he felt in an unbroken history going back to 1888 was worth preserving. He paid all debts in full. Not one creditor went away without being paid what they were owed. If the Newco want the Oldco history then they should pay the debts of the Oldco. We of the green persuasion are accused of being ‘obsessed’ with the whole Rangers sham. The truth is we won’t sit back and let the biased elements of the media gloss over a shameful episode as if it were a minor mishap. This is and was the biggest story in the history of Scottish football and they should have investigated every aspect of this farce with zeal and vigour. Yes, some Celtic fans are loving this whole scenario and why not? Rest assured if the boot was on the other foot they would be rubbing our noses right in it. I don’t recall any ‘Scottish Football needs a strong Celtic’ when we were in dire trouble in the early 1990s. We lived through those bleak days with an arrogant and boastful Chairman at Ibrox telling us ‘If they put down a fiver we’ll put down a tenner.’ How ironic the same man sold the sinking hulk for £1.


At 10am on a bright June morning a year ago the creditors, who were owed tens of millions of pounds by Rangers FC, entered Ibrox through Exit 50 to deliver their verdict. By 10 past 10 they shuffled out having refused the insulting CVA offered by Charles Green. From that moment on Rangers FC was doomed. The liquidators were called in and the Club died. Green bought the assets of the dead company and started a new company. There is no case in Scottish or British law where the history of a dead company can be passed on to or bought by a new company. The whole idea is simply ludicrous.  The original Rangers Football Club, Company number 004276, incorporated in 1899 is in liquidation. It ceased trading because it was insolvent. All the distortions and half-truths and lies in the world can’t disguise that fact. Its main business was football and the related marketing activities which go with that, nothing else. It wasn’t a holding company which died. It wasn’t a subsidiary which died. It was the Rangers FOOTBALL CLUB. The clue, as stated earlier, is in the name.


As Mr Traynor said a year ago… ‘No matter how Charles Green attempts to dress it up, a newco equals a new club. When the CVA was thrown out Rangers as we know them died.”


For once we agree on something. Rangers Fc are dead and any ‘Bjorn Again’ Tribute acts are just that. Fakes making money out of misplaced nostalgia for the ‘bygone days of yore’ when Rangers thought they were untouchable. How the mighty have fallen! 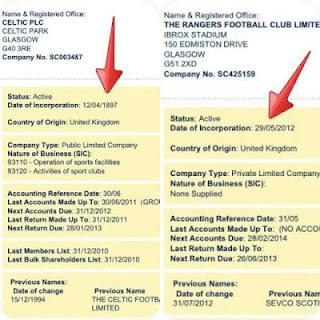